Recently, the University of Michigan published a story about the outreach efforts of Bruce and Jacqueline Cook. The work of the Cook Family Foundation to support students from Shiawassee County serves as the basis for a larger statewide effort. The article from the Fall 2016 issue of the “Leaders and Best” is reprinted here with permission. 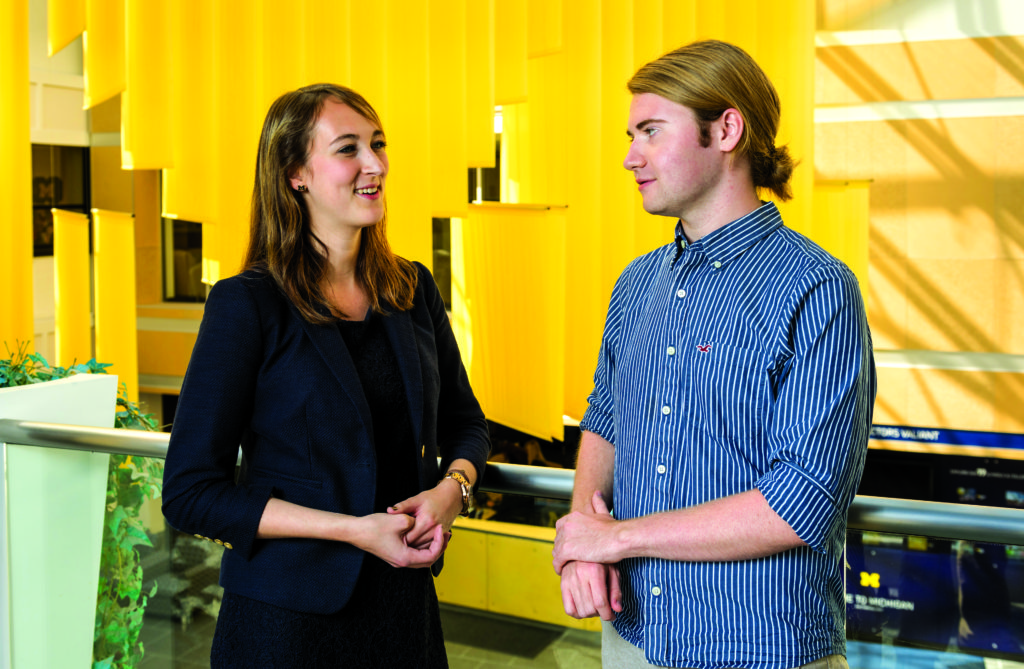 As a high school senior, Sarah Rice (BS ’16) of Owosso, Michigan, was called to the principal’s office. She had worked hard to build a bright future, and this was not in her plans. What could be the problem? she wondered. There must be some mistake. What Sarah feared would be her end turned out to be a beginning. Inside the office was a familiar face. It was Bruce L. Cook (BBA ’50, MBA ’51), waiting to make Sarah a life-changing offer: the Donald Cook Scholarship, which at the time (2012) provided $10,000 a year for four years at U-M.

This was just one of numerous scholarships provided to U-M students from Sarah’s home region, thanks to the generosity of Bruce and Jacqueline Cook (BS ’52) and the Cook Family Foundation. They see to it that every student from greater Shiawassee County who applies to U-M and is admitted receives support to attend. In addition, a select student each year receives the Donald Cook Scholarship  (as Sarah did), and another receives the Bruce and Jacqueline Cook Scholarship—full tuition for four years.

Before the Cook Family Foundation developed their scholarship program, few students from Shiawassee County historically applied to U-M—let alone attended— in a typical year. In Sarah’s hometown, in fact—a mid-Michigan town about halfway between Flint and Lansing with a population of just under  15,000—only about 14 percent of residents hold a bachelor’s degree or higher.

Coming to U-M from an outstate county isn’t just good for the students who do so, Sarah said: “The unique perspectives students from those counties bring are important.” This fall, Sarah began an internship in the Office of Enrollment Services, where she will help administer a new program designed to expand the model of the Cook family and their foundation to other Michigan counties. 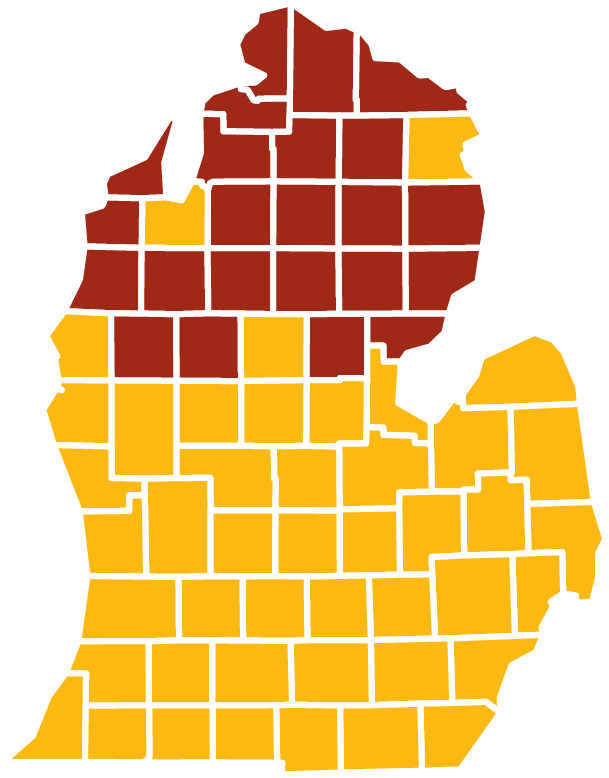 Counties where students are eligible for the Michigan Alumni Scholarship

The Michigan Alumni Scholarship, as it’s called, will provide financial support to students from areas that are geographically underrepresented at U-M. Bruce and Jacqueline Cook have contributed $1 million in support of the new program and hope other donors will follow their lead. Scholarships  like these make it possible for students from  outstate Michigan to choose U-M, Sarah said.

That is the case for Mitchell Lawrence, a freshman in the College of Literature, Science, and the Arts and the Taubman College of Architecture and Urban Planning. A resident of the Living Arts community on North Campus, Mitchell came to U-M from Byron, Michigan (population: 565), as the Bruce  and Jacqueline Cook Scholar.

Mitchell’s parents landed in Byron in 1994 when Mitchell’s dad took the helm as camp director of  a family-friendly campground on Myers Lake. “It’s a very rural community,” Mitchell said. “There’s not a lot to do.” At the same time, he added, “Your environment doesn’t necessarily define you.”

In high school, Mitchell was student body president for three years, participated in drama club and band, and served as junior drum major and drum major. He ran cross country and track, and he taught himself graphic design by competing annually in a Business Professionals of America competition—eventually traveling to California to represent the state of Michigan. Mitchell also studied Japanese—first through online classes and later through a dual enrollment between his high school and Lansing Community College. He twice spent time in Japan.

Even with his many accomplishments, Mitchell was shocked to receive a phone call in the winter of his senior year of high school letting him know that he was a Top Five finalist for the Bruce and Jacqueline Cook Scholarship. “Getting that phone call was very surreal,” he said. “It was a really amazing moment.”

Mitchell is the 11th recipient of the Bruce and Jacqueline Cook Scholarship. He and Sarah are just two out of hundreds of students who have come to U-M through the years with the support of scholarships funded by either Bruce and Jacqueline Cook or the Cook Family Foundation. The foundation’s primary benefactor was Bruce Cook’s father, the late Donald O. Cook (AB ’24) [1902–97].

A longtime resident of Shiawassee County, Donald Cook was a career sales representative for the Owosso-based Wolverine Sign Works and became  its sole owner in the early 1960s. His passions included both U-M and Shiawassee County,  and he delighted in bringing the two together.

Encouraging students from rural Michigan to apply to U-M is not always easy, Bruce Cook  said. U-M received about 55,000 applications for admission this year, including about 10,000 from state residents. Of those 10,000, most come from just seven of the state’s 83 counties, primarily in Southeast Michigan. “The rest of Michigan participates very, very lightly,” Cook said.

“The students are out there, and the potential is out there in these students,” Mitchell said, “but a lot of times, they don’t recognize it. They might never live up to it if they don’t see it in themselves.”

As a joint effort between the Office of Undergraduate Admissions and the Alumni Association of U-M, the Michigan Alumni Scholarship will enlist the participation of alumni in underrepresented counties. They will provide a personal connection to U-M, much as Bruce and Jacqueline Cook do in Shiawassee County. “It’s really using our experience here as a guide for what we’d like to do throughout the state,” Bruce Cook said.

“We’re not talking about changing our admission standards a bit for these kids,” Cook said. “They’ve gotta stack up with the best kids from anywhere.” If Sarah and Mitchell are any indication, they will.