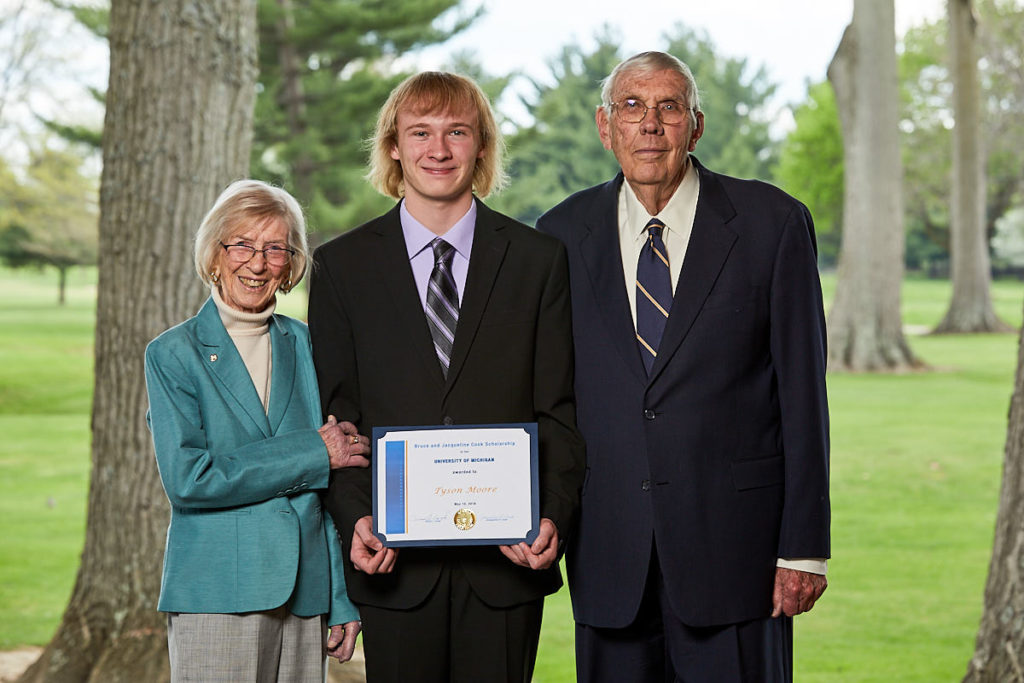 The future Wolverines were recognized at a dinner on May 10.  Special guest at the event was Dr. Martin Philbert, Provost and Executive Vice President of the University of Michigan.  Philbert, the former dean of the U-M School of Public Health was educated in Great Britain, earning a bachelor of science degree from the University of Cambridge and medical degree from the London Royal Medical School.  He began his academic career at Rutgers University and joined the U-M faculty in 1995. Dr. Martin’s message to students: “The most important reason for coming (to U-M) is the way you’ll be challenged to think hard, to ask critical questions, analyze from many perspectives and develop complex solutions to problems.”

At the reception, Tyson Moore, senior of Corunna High School, was awarded the Bruce & Jacqueline Cook Scholarship. This four-year, full tuition scholarship is funded separately from the Foundation by its namesakes. Tyson is the son of Michael and Jennifer Moore, and plans to pursue a major in biochemistry with the goal of becoming a medical researcher. At CHS, he is a member of the concert and marching bands, and was a drum major for two years. He is an accomplished member of the swim team, and has served as captain and lifeguard, and is a proud member of the National Honor Society. Accepting the award, Moore shared, “I’m extremely grateful. I can’t fathom the generosity of someone who wants to pay for me to learn and someday help others.” 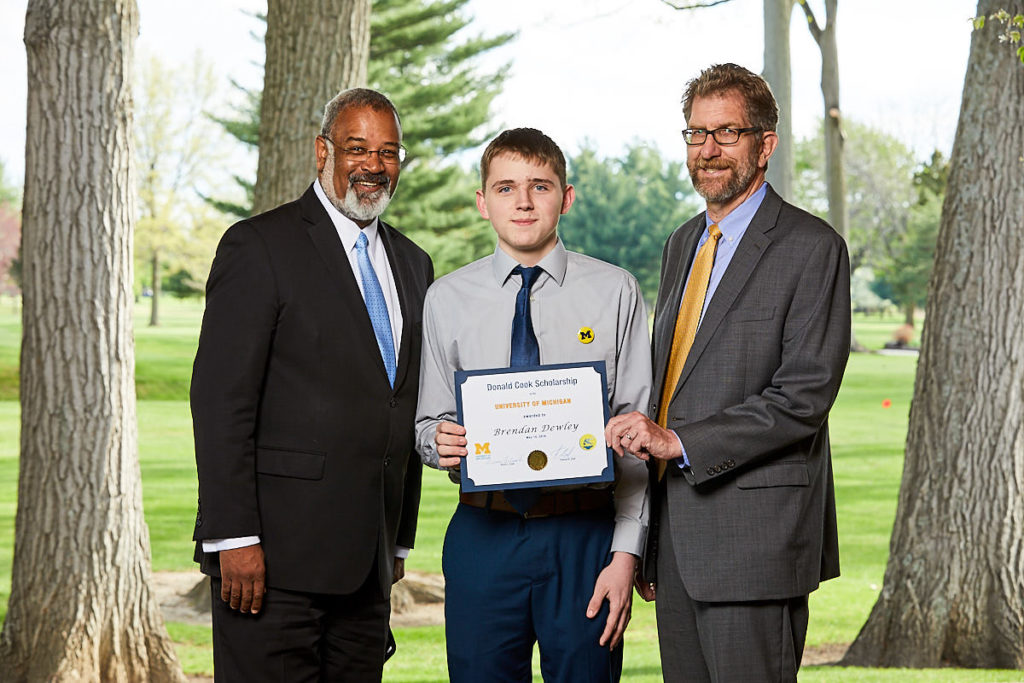 Brendan Dewley, Owosso High School senior, is the recipient of the Donald Cook Scholarship. He has been the vice president of the student government at OHS for two years, and is a member of the quiz bowl team and National Honor Society.  He has played tennis and worked on the robotics team, and is employed at Bob Evans restaurant. He is the son of Josh and Lynnette Dewley and the interests he intends to pursue at U-M include communications, political science and social change, leading to a career as a television writer, journalist or possibly a lawyer. “I am very grateful for everything the Cooks have done,” said Dewley.  “It’s going to put me at ease knowing I have their support.”

The Donald Cook Scholarship is awarded by the University of Michigan to a student attending the College of Literature, Science and the Arts and provides $5,000 per year for four years at U-M. It has been financially supported by the Cook Family Foundation in recognition of the Foundation’s founder.  In 2017, the Foundation entered a multi-year funding agreement to endow the scholarship in perpetuity at the University.

Of the twenty scholarship recipients, in addition to the Bruce and Jackie Scholarship winner, Tyson Moore from Corunna High School and Brendan Dewley of Owosso High School there are students from nine area high schools, with three valedictorians (Kathryn Beeman of Ovid-Elsie, Ryan Kingsbury of Laingsburg, and Nicholas Mazarra of Durand) and two salutatorians (Christopher Mars of Corunna and Spencer Wood of Morrice). Other scholarship winners were: from Byron, Olivia Howard and Ian Wilsdon; from Corunna, Ramneet Chauhan, and Michael Miller, Jr.; from Laingsburg, Matthew Nickols and Emma Smith; from New Lothrop, Michael Kieffer and Rebekah Riley; from Owosso, Jake Bacigal, Abigail Brainerd, Daniel Clevenger and Damien Moore, Jr.; and from Perry, Trent Ivey.

For more information on the Foundation’s scholarships, visit this page.