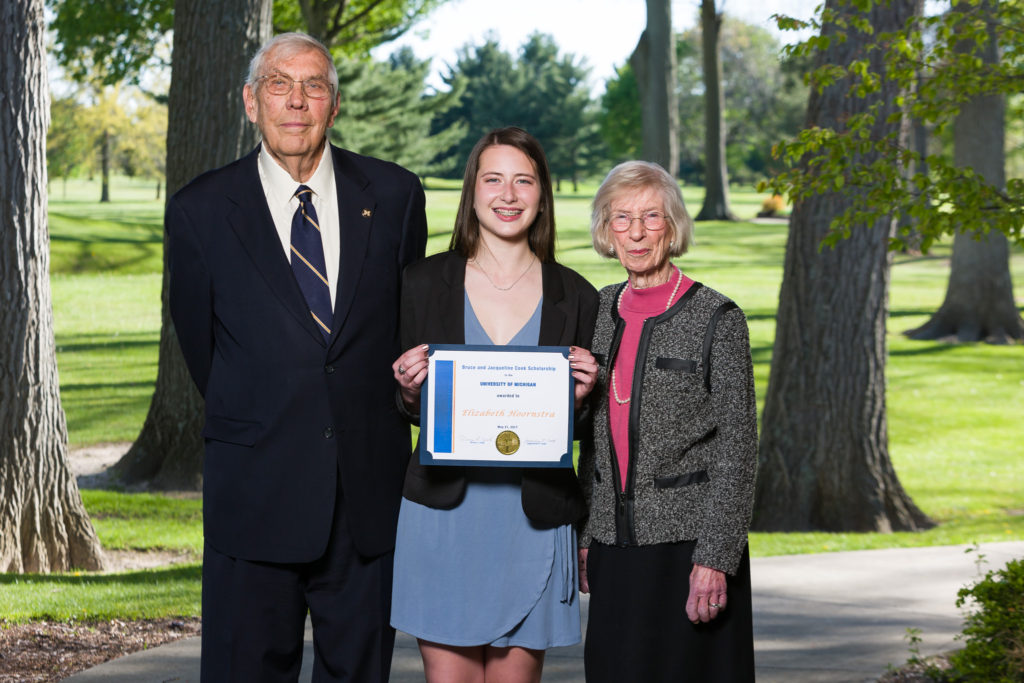 Elizabeth Hoornstra, of Chesaning, with Bruce and Jacqueline Cook

The future Wolverines were recognized at a dinner on May 8.  Special guest at the event was Andrew Martin, Dean of the College of Literature, Science and the Arts (LS&A) at the University of Michigan.  Noting the talented scholarship recipients, the Dean said that “all of the students we admit to the University of Michigan bring a unique combination of talent, goals, ambitions, personality and passion.”

At the dinner, Elizabeth Hoornstra, the valedictorian of Chesaning Union High School, was awarded the Bruce & Jacqueline Cook Scholarship.  This four-year, full tuition scholarship is funded separately from the Foundation by its namesakes.  Elizabeth is the daughter of John and Jennifer Hoornstra, and plans to pursue a major in the social sciences, public health, or some other field where she can “create a difference in someone’s life.”

Hunter Glew, of Corunna, and Andrew Martin, Dean of LS&A

Hunter Glew, the valedictorian of Corunna High School, is the recipient of the Donald Cook Scholarship.  She intends to pursue research at the University of Michigan and major in neuroscience or psychology.  She is the daughter of Matthew and Cynthia Glew.

The Donald Cook Scholarship is awarded by the University of Michigan to a student
attending the College of Literature, Science and the Arts.  It has been financially supported by the Cook Family Foundation in recognition of the Foundation’s founder.  In 2017, the Foundation entered a multi-year funding agreement to endow the scholarship in perpetuity at the University.

Of the 19 scholarship recipients, seven of them are valedictorians.  In addition to Hoornstra and Glew, the co-valedictorians of Owosso High School (Usman Kahn and Sarah Landes) and the valedictorians of Perry (Jessica Beattie), Byron (Jordan Goodrich), and Laingsburg (Paden Graham) were all admitted to the University of Michigan.

For more information on the Foundation’s scholarships, visit this page.