One student was awarded one of the highest accolades in the greater Shiawassee County region, the Bruce and Jacqueline Cook Scholarship, which provides four years of tuition to the University of Michigan in Ann Arbor.  An additional 20 students have received scholarships from the Cook Family Foundation, including one recognizing the Foundation’s benefactor, Donald Cook.  “It is great to get to celebrate in-person with these outstanding students, and give them some recognition for maneuvering through this pandemic so successfully academically–they certainly deserve it!”  said President, Bruce Cook.

Elizabeth Tolrud of Owosso was awarded the Bruce and Jacqueline Cook Scholarship, which is funded by its namesakes separately from the Foundation.  High school seniors in the Shiawassee region are nominated each fall and pre-pandemic students are normally invited on a trip to Ann Arbor. Winners are selected based on their educational achievement, leadership and scholarly promise.

Elizabeth is the daughter of Michael and Carol Tolrud. She is the valedictorian of her class at Owosso High School and was an area top-scorer on  her SAT’s  as well as a Shiawassee Scholar. She also received a Regents Merit Scholarship from the University of Michigan.  She is President of the Shiawassee Youth Advisory Council, Senior Vice-President of Student Government, President of Model United Nations, Treasurer of the National Honor Society, and a section and squad leather in the award-winning OHS Marching Band.  Elizabeth is enrolled in the Honors College of the Literature Sciences and Arts School at the University of Michigan and wishes to pursue a career in the environmental field, leading to a career as an environmental consultant, engineer or urban planner. 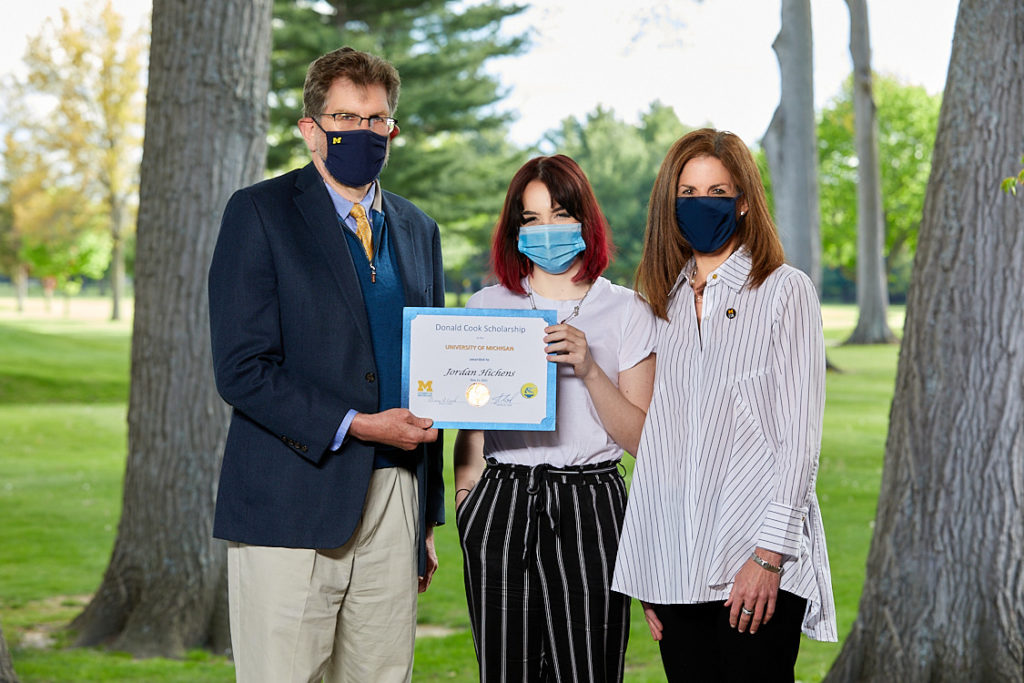 The Donald Cook Scholarship was awarded to Jordan Hitchens of Ovid-Elsie. The Donald Cook Scholarship, endowed by the Cook Family Foundation, is awarded by the University of Michigan to a student attending the College of Literature, Science and the Arts and is named after the 1924 graduate of the University of Michigan who established the Foundation with his wife Florence-etta in 1978.  This is a four-year scholarship worth $20,000.

Jordan Hitchens is the daughter of William and Miranda Hitchens. Jordan is the valedictorian of her class and has had significant academic accomplishments at her school, with AP and dual enrollment classes through Lansing Community College.  She intends to pursue a degree in Psychology with plans to attend medical school in the future to study psychiatry.  In addition to being an excellent student, Jordan is an accomplished artist and has been involved with the National Art Honor Society; she is currently the President of that organization.  She plans to continue with the arts at UM as well as taking advantage of the excitement and diversity of Ann Arbor.  “We are confident she will go on to great things,” noted Tom Cook as he presented her with the Donald Cook Scholarship.

The aforementioned reception to recognize scholarship winners and their families was held at the Owosso Country Club. Honorees had the additional honor of Dr. Anne Curzan, Dean of the College of Literature, Science, and the Arts as the guest speaker. Dean Curzan is a trained linguist who dedicated an earlier strand of her distinguished career studying how the english language “got to be the way it is”.  Along the way she has received numerous awards for outstanding research and undergraduate teaching.  Today she is dedicated to making the LSA school a model of a liberal arts college within a top-ranked research university.  She earned her Bachelor of Arts degree from Yale and Masters and PHD from U of M.